Esther Mannouch is a retiree who feared radiotherapy damage to her hand would end her music-making. A recorder designed to meet her specific needs, and access to the wider support of the OHMI network, has allowed a welcome return to playing the recorder. She tells us about her journey. 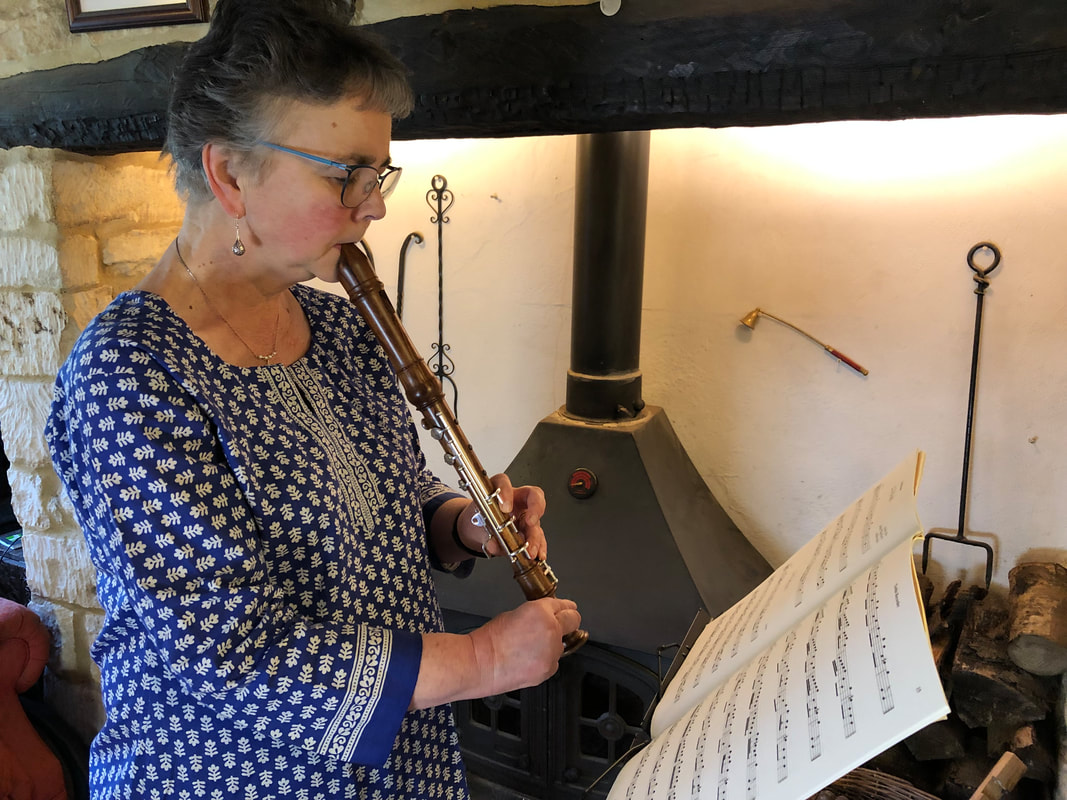 Esther Mannouch – a highly accomplished player of the one-handed recorder and a good friend of The OHMI Trust.
​“My love of music was almost certainly inherited from my parents. Growing up in The Sixties, our family farm in Pembrokeshire was always full of the sound of music, from the old upright farm piano, to the ukulele and bagpipes! With such an eclectic mix, my four siblings and I grew up knowing there would be an instrument out there we could each call our own.

I started the descant at primary school and quickly progressed on to the treble recorder. By the age of nine I wanted to learn the flute. I was lucky enough to attain a scholarship, funded by Hampshire Music. I got involved with local area orchestras, in particular the Hampshire County Youth Orchestra. While at sixth form college, and after gaining my grade 8 flute exam, I started to teach flute with several promising pupils. I continued to play my recorder for my own pleasure up to approximately grade 6 level. Music was a huge part of my life, as was my decision to train as a nurse when I was accepted to the nursing college at St. Bartholomew’s Hospital in London.

But suddenly, in 1981, my world collapsed. A diagnosis of Hodgkin’s Lymphoma meant the removal of my spleen and a course of radiotherapy. What seemed like an eternity of hospital visits and various treatments ensued over the coming eighteen months but, thankfully, all was successful and life returned to normal.

My nursing studies took priority, of course, with flute and recorder practice a close second and third. Not long after I qualified as a nurse, however, my right hand started to tremble for no apparent reason. Any everyday activity that involved use of my right hand suddenly became almost impossible, from taking a patient’s blood with a syringe to tying my own shoelaces. The almost complete loss of fine movement and muscular control in my dominant hand was a shattering blow. It turned out that the damage was irreparable and had been caused by the large doses of radiotherapy I had received. Not only would it put my nursing career at risk, it meant I could no longer play my flute, piano or recorder.

Another life-threatening brush with Hodgkin’s Lymphoma in 1991, a course of chemotherapy, and further damage uncovered from the original course of radiotherapy, and I seemed to be getting further and further away from being able to make music myself.

That was until, in late 2020, I decided to take action. Could I find an instrument or equipment that would allow me to get back to music-making? My sister Jean Paterson, who plays with English Baroque Soloists and the Orchestra of the Age of Enlightenment, put me in touch with Dick Earle, a professional oboist and oboe maker, who directed me to Peter Worrell, an instrument maker whose creations include adapted instruments for people with limb differences who find it difficult to play standard instruments. With some ‘fine tuning’ for my particular needs, Peter – the master craftsman that he is – assured me there was a solution for me.

A Mollenhauer Denner 5220 treble recorder was an appropriate size instrument for Peter’s modifications, so my purchase was sent over to him for adaptation in April 2021. The result – my modified recorder – is best described as a cross between a wooden recorder and flute. It has keys like the flute, but its basic shape is a very recognisable recorder. Some of the original finger holes have been plugged and remade further around the cylindrical body, and there is even a finger hook for my left thumb to support the recorders length. It means I can change notes and pitch using my working set of fingers! Peter even added an extra ‘Reach’ key on the Foot Joint since my little finger couldn’t quite reliably reach where it was supposed to go.

Getting hold of an adapted instrument was only the start of my journey back to music-making, and I have OHMI to thank for introducing me to a super support network. They helped me find a lovely recorder teacher, Liz Wrighton. Liz is a flautist by training but has worked with children and their one-handed descant recorders, and has given me many tips on improvement. OHMI also put me in touch with the Society of Recorder Players (SRP). Meeting up with one of their local groups has given me both camaraderie and a regular opportunity to practise.

My next challenge, and as a thank you to OHMI for their unfailing support, is to raise money to adapt four treble recorders for people with upper limb impairments to be able to use and try. My plan is to team up with my super-talented musical siblings, and raise funds through a concert. Knowing what a difference the work of OHMI makes in making adapted instruments available as well as signposting to the most supportive of groups, compels me to help others who find themselves, for whatever reason, without the use of one hand.”

Knowing what a difference the work of OHMI makes in making adapted instructments available, compels me to help others who find themselves, for whatever reason, without the use of one hand .