An important element of OHMI’s work is supporting research and development of new adapted musical instruments and enabling equipment. Often these solutions lie in the ingenious minds of young engineers which is why OHMI was keen to become a collaborative partner on the Hackcessible project.

Here we tell the story of professional French horn player, Chris Griffiths, who is one of the project’s most recent beneficiaries. 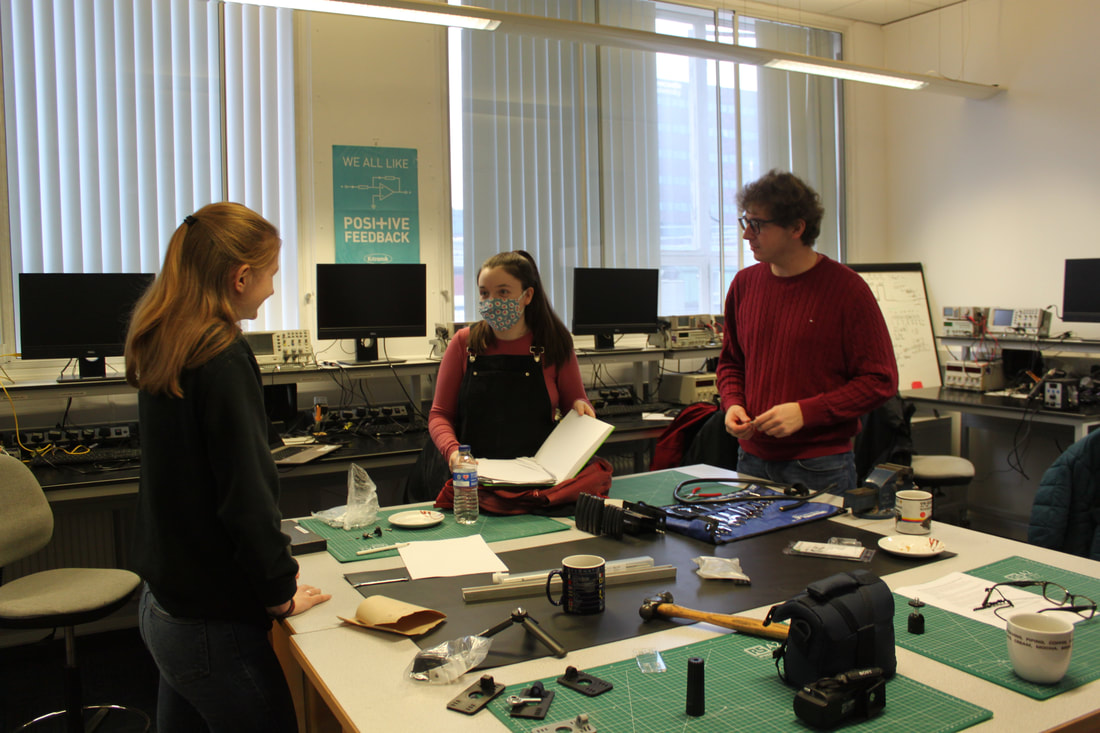 Engineering students at Newcastle University working hard on the development of a support for Chris' French horn.
Even sixty years on, Chris’s passion for playing the French horn is undiminished. He has been fortunate to have made a living from the instrument he loves, through playing, teaching and conducting. He has been a member of the Royal Northern Sinfonia for over 20 years, and is now freelance.

Chris also has the condition Charcot-Marie-Tooth (CMT), a neuropathy which affects hands and feet. It’s a condition that led him to electing to become a double amputee 12 years ago, and is one that affects the dexterity in his hands.

The challenge of holding the instrument ​

Since the French Horn only has three valves, it is less problematic for Chris to play than other instruments. Nevertheless, it still requires strength in both hands.

“The horn is a lopsided instrument, so I have to support it with one hand and operate the three valves with the other. I have extensive deterioration in the bone and some muscles have gone, which is a fairly standard deterioration of the neuropathy."

“This creates a problem with holding the instrument and operating the valves (even though I now have the lightest instrument I can get), so I was keen to learn whether there was a solution to help with the weight of the horn.”

Chris raised his challenge with his good friend and fellow performer, Clarence Adoo MBE. Clarence – a long-term supporter of the OHMI Trust – suggested Chris speak to the charity to see how they might help. That initial approach led Rachel Wolffsohn, OHMI’s General Manager, to bring Chris’s project to the team at Hackcessible.

Hackcessible began in 2018 as a collaboration between staff and students at the University of Sheffield. It is an Assistive Technology innovation competition consisting of a series of workshops and an annual make-a-thon. It brings together engineers, designers, programmers, healthcare professionals and students to collaborate with individuals with disabilities and to create workable products that support their needs.
​

Could the power of ingenious, young engineering minds be applied to Chris’s challenge? Dr. Pete Mylon, co-founder of Hackcessible and also Senior University Teacher in Multidisciplinary Engineering Education at the University of Sheffield, certainly thought so. It also proved fortuitous that another university, Newcastle, had recently joined the project which meant that support for Gateshead-based Chris was available on his doorstep.

“The whole idea of open-source investigations in this area was a great revelation to me. I was ignorant of it and thought everything would be subject to patents.”

The five-week project involved weekly team meetings, allowing the students involved to leave no stone unturned when it came to understanding Chris’s playing of the instrument.

“There’s a lot to consider, not only in how the instrument is played, but also how it is transported and prepared for performance. Chris is clearly the expert when it comes to the instrument itself; for my part, I was interested in seeing how the team would tackle its transportation; ensuring that it is lightweight and that any attachments fit easily into a case.”

The collaboration culminated in a make-a-thon, held in the first week of December 2021 at the University of Newcastle’s Engineering Department.

“It really was a moment of pure discovery, and I was astonished the Newcastle University students, under the guidance of Paul Watson, Electrical and Electronic Team Leader in the School of Engineering, had considered every required angle. With the stand, I can now have my hand correctly positioned in the bell and properly adjust the tone and tuning. It even allows me to rotate the horn so that I can drain it of water.”

You can view the video here

Chris now has the stand in his possession, and is looking forward to the fanfare it will receive at his next performance.  The stand has a wider application for many other musicians, whether they are born with a condition that affects dexterity, or have developed one later in life. It can also be adapted to fit other instruments like the trumpet.  ​

With the stand, I can now have my hand correctly position in the bell which makes it so much easier to adjust the tone and tuning.  It even allows me to rotate the horn so I can drain it.