Having recently achieved his Grade 4, 12-year-old Owain, who was born without a right hand and with a partly-formed left hand, has become OHMI’s most accomplished trombone player. Having access to suitable equipment has unleashed a hidden musical talent which was put on proud display when he represented OHMI at a recent Lambeth Palace performance, as mum Melissa recounts. 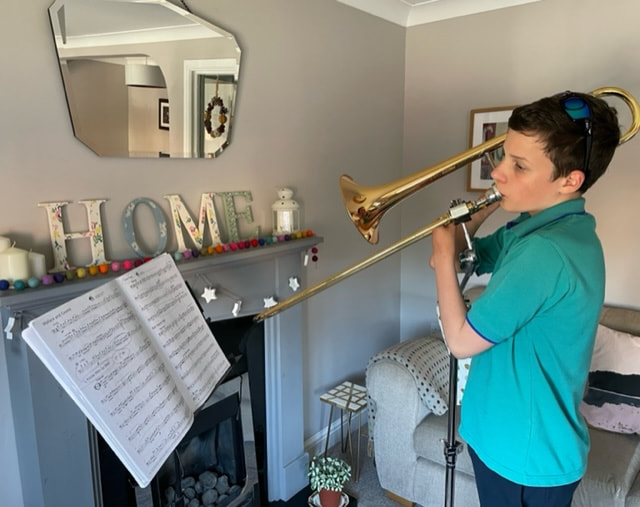 The story of trombone-playing Owain
“I could tell you that Owain has harboured a burning desire to play the trombone since his earliest years, and that now having that opportunity is a dream come true. The reality is a little less Disney than that!  Owain’s is simply a story about a boy who had access to the right instrument and the right teacher at the right time and, as it turns out, is pretty good at it.

We’re not a musical family, and it was only when we received a letter from school in Year 5 that we asked Owain if he wanted to join music lessons.

At that point, I thought about approaching Rachel Wolffsohn, General Manager at OHMI. We had met some years earlier at a family weekend, hosted by the Reach charity (which supports families of children with upper limb differences), and where OHMI always has a stand. I knew OHMI would be able to help, and it was Rachel’s suggestion that the trombone might be a suitable instrument for Owain.

Originally, he played a standard trombone, but with an adapted stand which would take the weight, provide an appropriate angle, and allow him to play with more dexterity.

Before long, he had made steady progress and needed to reach further on the slide. OHMI stepped in and procured an adapted, more compact trombone.

Having achieved grade 4 distinction in under three years, Owain’s progress has been pretty impressive – at least, as far as his family, teacher and OHMI are concerned! For Owain – who is a pretty mature and level-headed young person – he’s often surprised that people say he’s ‘good’ at trombone. He doesn’t have anything to compare to, so he doesn’t realise how much he has accomplished.

​Owain only started lessons in September 2019, and of course by March 2020 Covid hit. It meant he missed many lessons and had a proportion of his lessons online.

There really hadn’t been much opportunity to perform in front of any kind of audience, so it was exciting and nerve-wracking in equal measure that he was asked to represent OHMI at a performance last Christmas at Lambeth Palace.

Owain’s made it very clear he’s happy to play at other events (especially if it means a day off school!), and we’re hoping that his school will soon restart its orchestra.

Advice to other parents ​

​For any other parent of a child with a limb difference, I would simply say ring Rachel! She’s a wealth of information, and a simple chat will determine what’s on offer.

Having OHMI on board makes things happen. It’s the subtle nuances that are hard to articulate. For example, when we engaged with our local music service and said that our child with a limb difference wanted to play trombone, we added an important footnote – here’s the trombone stand that can make that happen. It meant that we were able to offer a solution to an early hurdle, and pave the way for Owain to start lessons without delay or fuss.

Owain was lucky that he had the right equipment from the start, a good link with OHMI and a nice teacher (and parents who encourage regular practice!). All these factors enabled him to progress on the trombone in the way he wanted to. That means playing the pieces he recognises and wants to play like the Wallace and Gromit theme tune, and less so classic pieces.
​
He’s now loving whole class music learning. He’s keen to know where the trombone may take him in the future, but is also showing an interest in the keyboard and guitar. Whatever the instrument, he’s getting the opportunity to play loud and proud and, importantly, he’s getting the same choices as any other young person his age.”

For any other parent of a child with a limb difference, I would simply say ring Rachel! She's a wealth of information, and a simple chat will determine what's on offer.